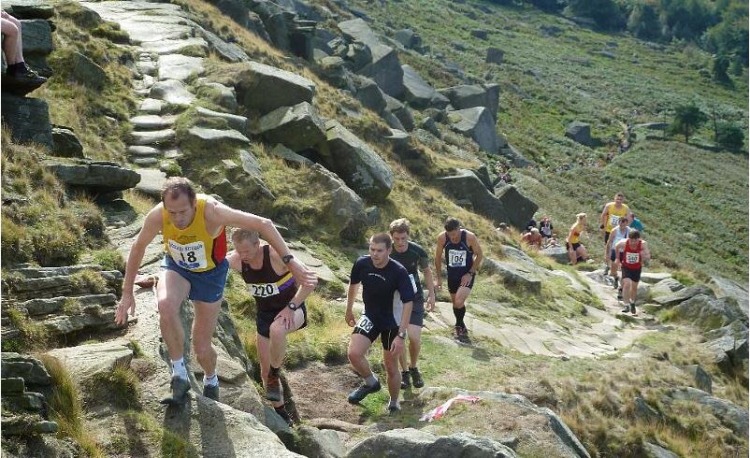 It was the picture above, or one just like it, that alerted me to the fact that these races were even going on across the peak district. I was still pretty much a running novice at this stage, running at lunch times with a couple of road 10k events behind me. The guys I was running at work with were pretty much road runners, but with my son playing football in Wirksworth, I had managed to hear about and take part in their Stuart Learmouth Undulator, which I had loved.

Not sure how I came upon the picture above but it spoke of something a bit more out of the ordinary, a bit more out in the wild. I liked the fact that you can see the line of runners tailing off into the distance looking like for these runners there is still a lot of climb left to do.

So I did this race in 2014, signed up on the day, for a fiver!! and it was fantastic. A flatish first mile followed by a climb up to the edge, a run along the top that seemed to go for ages, a charge back down the hill and a final mile that seemed to have more up than down, especially as I’d left any energy I had remaining on the hill.

Can’t remember why, but I couldn’t make a return in 2015, so had it on my radar for this year. The fact that so many of these small fell races are entry on the day is great for me, think I have a problem with long term planning and the cost is in most cases very reasonable and going to local causes or school or village funds.

So this year I’ve made it to the lovely Hathersage, driving over the tops via Owler Bar. My natural instinct to avoid a queue leads me to not patiently waiting to park in the field but drive through the streets of the town getting further and further away from the school before finally getting a space under the railway. At least I then get a warm up getting back to the registration.

By the time I get into the hall there is no queue and sign on is completed in a couple of minutes. Plenty of Belper Harriers out on what is a fabulous day weather wise, with blue skies and sunshine on a warm September day. As an added bonus, son number one has made the bus trip from Sheffield and is there to meet me.

Time for a bit more of a warm up and a trip to the Hathersage’s public toilets, and let me just take time to say that, I am fully prepared to pay double next year as long as the extra money goes into the replace that toilet block fund.

Back into the fresh air and down to the start where we had a pistol to see us off. First mile does give plenty of time for the field to sort itself out before the climbing starts, so no need to push the pace too much. You get a great view of Stanage Edge during this time which does seem some distance away but its good to have the objective in sight.

The climb takes in tarmac, steps, a field and woods before a single track sandstoney path works it way up to the ridge. Two years ago there was a short bit of walking time as the runners bunched up near the top, so I’ve pressed on this year expecting some of the same, but as it turns out there is no rest bite and its straight up and on to picking my way along the sandstone edge.

Not much traffic along hear, unlike last time, and I find a bit of time to take in the amazing views that are all around at this point. A quick check behind me even tells me I’ve enough time to quickly whip out the phone and get a shot or two on the run. 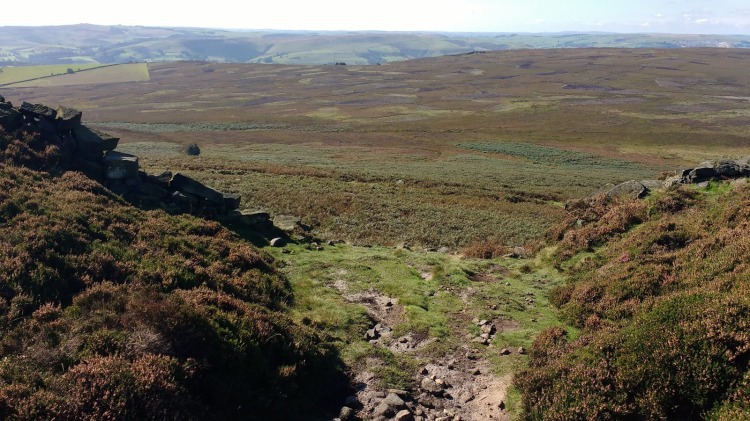 The picture above shows the drop off point from the edge which sees the start of the down hill back to the village. Single track at first, with not many passing places so there is a chance of getting caught behind or holding others up, but once over a stile there is plenty of space to pick up the pace or let others pass.

All the walkers encountered on the way down were extremely generous, seemingly not minding at all their walk being interrupted by a sting of vest clad runners zipping through the countryside, even holding gates open and offering encouragement.

Remembering last time, I’ve kept enough back for the run through the fields and back up to the church before the final run down the road to the finish. No sprint to the line needed today as I’ve enough distance between me and the runners behind and no chance of catching those in front, honest.

A bottle of water, some prize giving and a roast pork roll at the Pool cafe follows, chewing over the race with fellow Harriers, including Alan Billington, who took the fab shot below. Strikingly similar to the one at the top, except this time there’s me in the race, fantastic, thanks Alan. 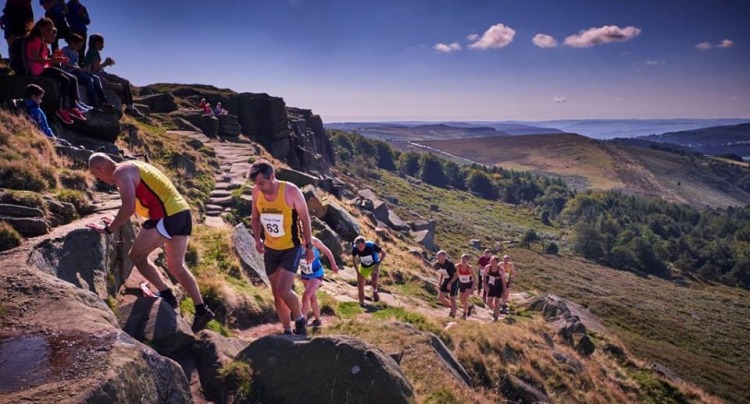 Thanks also to the Fat Boys Running club for putting on such a lovely event and the fabulous marshals. Would I do it again? Yes, how about next year.